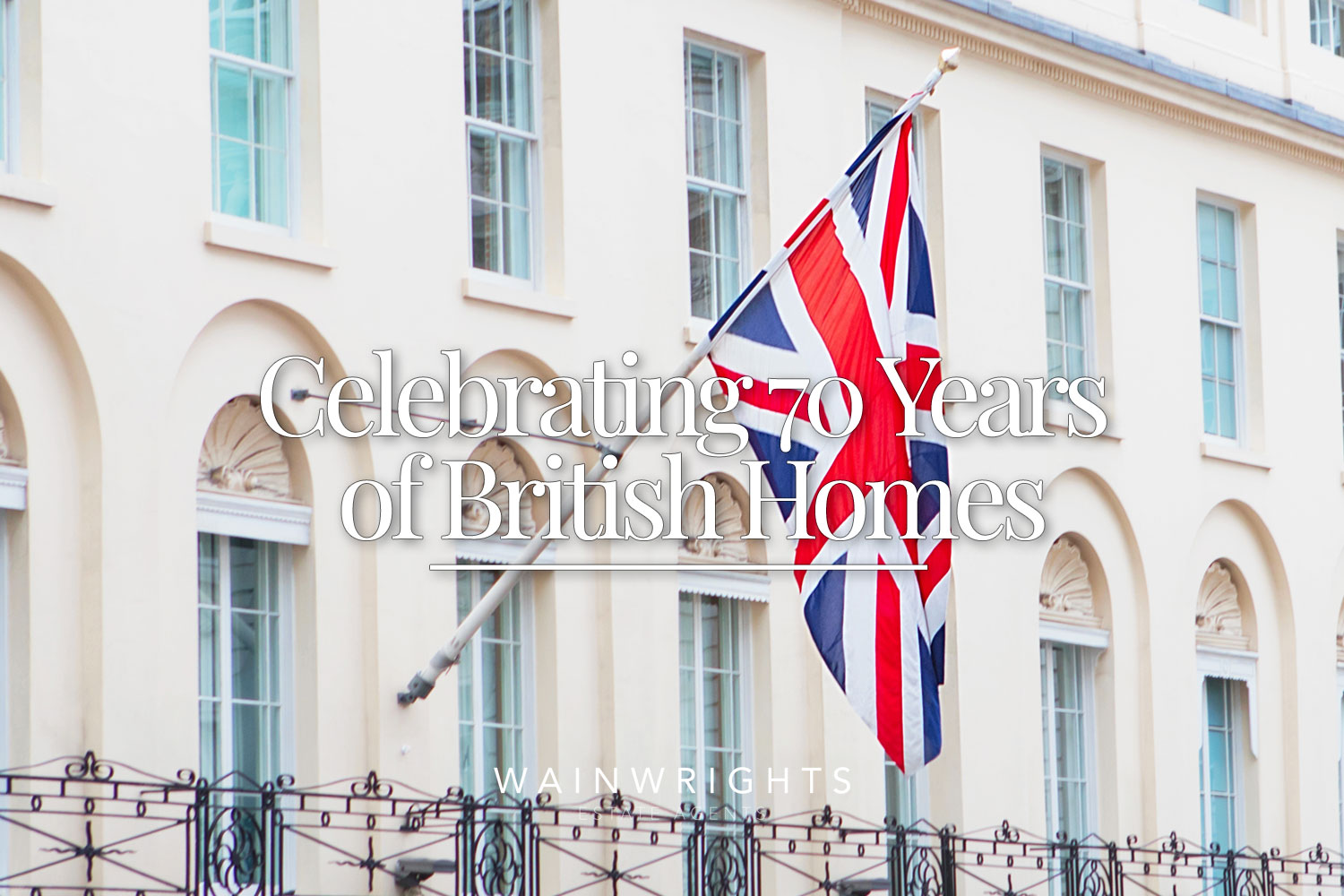 As the Queen celebrates an incredible 70 years on the throne, and we enjoy a weekend of bunting, red, white and blue cupcakes, and Britishness, join us as we take a look at how property has evolved over the last 70 years.

1950s – Brutalist architecture and the birth of low-cost housing 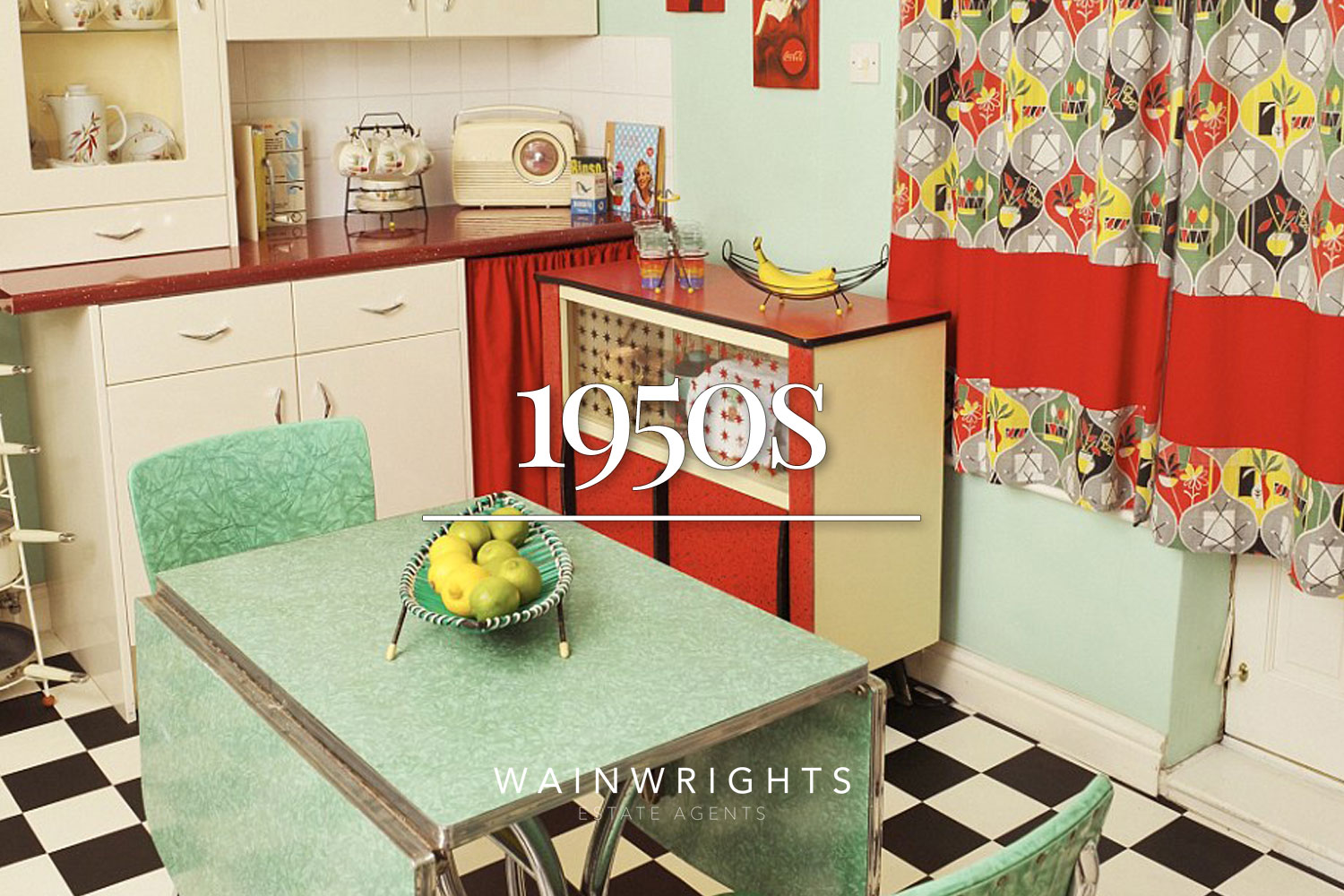 As Queen Elizabeth II ascended to the throne in 1952, post war Britain was also on the up – with new low-cost housing being frantically erected following the bombing and demolition that followed the end of WW2.

With consumer wealth on the rise, Britons were ready to splash the cash after the austerity of the 1940s. Architects attempted innovation, with traditional hanging tiles and white weatherboarding; wide windows became more prevalent creating light living spaces.

Although Brutalist Architecture was the term coined for the minimalist exposed concrete and brick constructs of the 1950s, inside, pastel colour schemes for kitchens and bathrooms were all the rage: think pink, mint green, lemon yellow, turquoise and blue!

Highlight of the 50’s Home: Gardens – which had been a luxury pre-war – became a staple of the home. The 1950s saw the boom of the flower bed and the birth of ‘grow your own’. 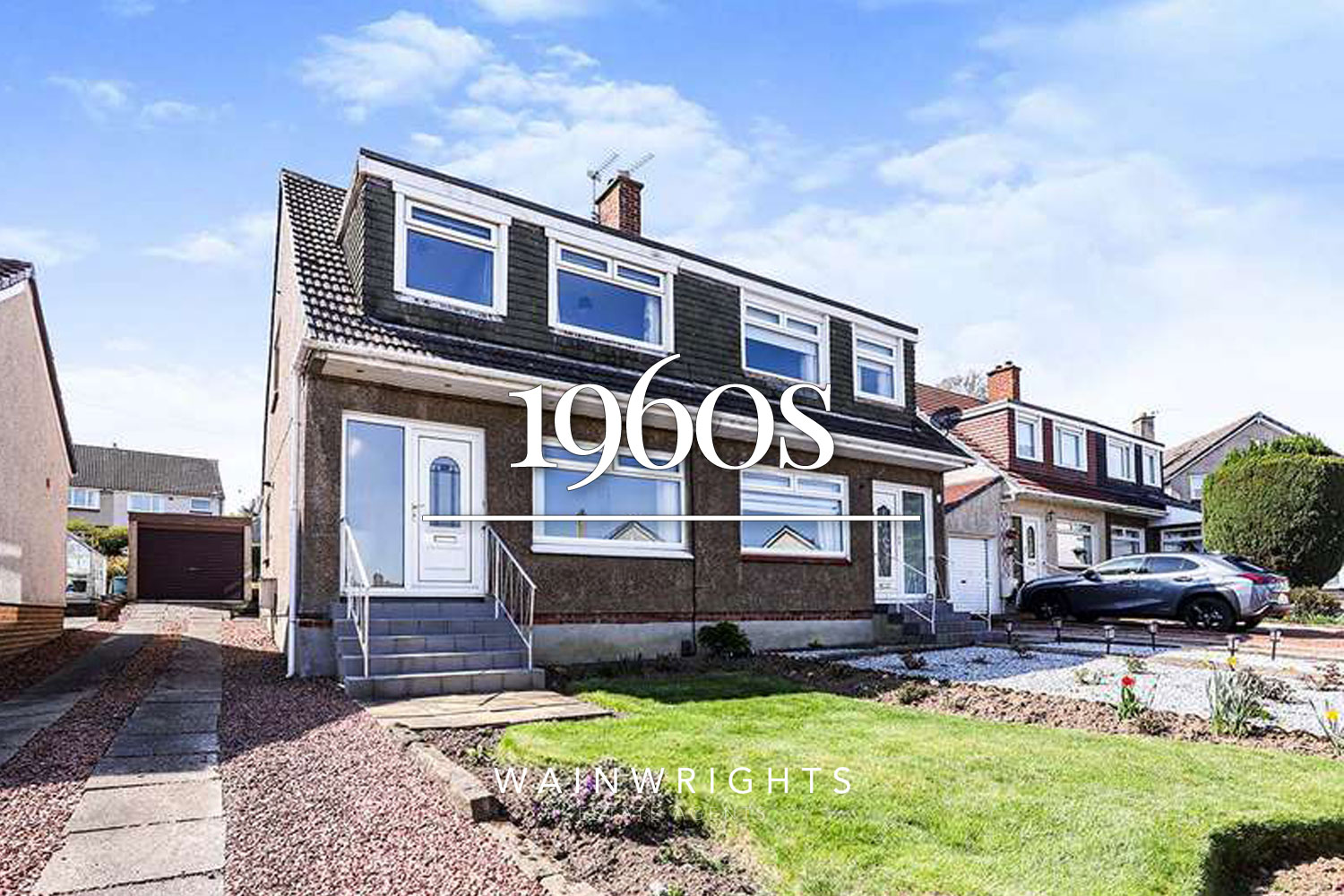 Nowadays, 1960s homes are seen as desirable renovation projects, although back in the day they were seen as lacking in the grandeur of Georgian and Victorian homes. Recognisable for their experimentative shapes and angles, 1960s homes tend to combine flat asphalted garage roofs, flat roofed dormers and an abundance of side windows to draw in light.

Indoors, the layout of 1960s homes tended to reflect the new style of informal living that was emerging in the flower power era. The old-fashioned parlour was set aside for two larger rooms – a living and dining room, with the latter possibly to be integrated with a kitchen in an ’L’ shape style.

Highlight of the 60’s Home: Fitted kitchens were becoming fashionable with space created for electric domestic appliances such as refrigerators and washing machines.

The 1970s saw the rise of the three-bedroom L-shaped home. Often critiqued for its architectural style, think Artex ceilings (with the occasional splash of asbestos) and walls overloaded with tiled cladding.

Cameras with their sepia settings really failed to do justice to the Fraggle Rock vibrancy of zesty orange shag-pile rugs in the living room, bright yellow Formica kitchen worktops and classic avocado brown bathroom suites. At least they managed to capture the clash of zany swirling wallpaper and hexagonal lino though.

Highlight of the 70’s Home: Having a bathroom with separate toilet. A godsend for large families. 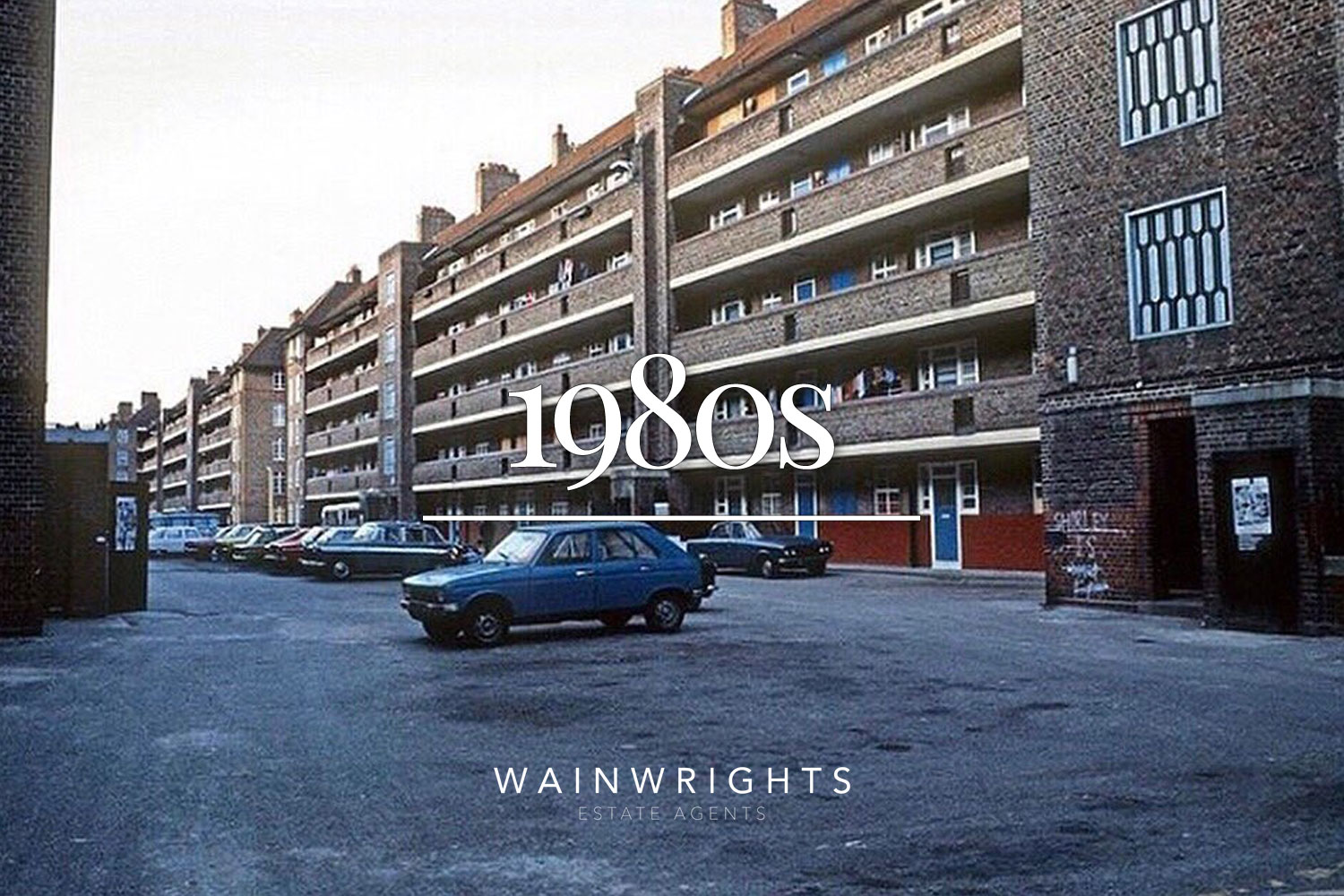 The 1980s brought with it the yuppie – or young urban professional, an upwardly mobile type with a penchant for luxury accommodation. In the cities this meant high end apartments, whilst in the suburbs this resulted in larger homes, big enough to accommodate the growing average family.

Chintz, pastels, glass and mirrors were hallmarks of the 1980s, along with lacquered monochrome furniture, dust ruffles and drapes. In the kitchen, by contrast, the 1980s preferred hardwood oak cabinetry

Highlight of the 80’s Home: Double garages – which are seldom used for storing cars. 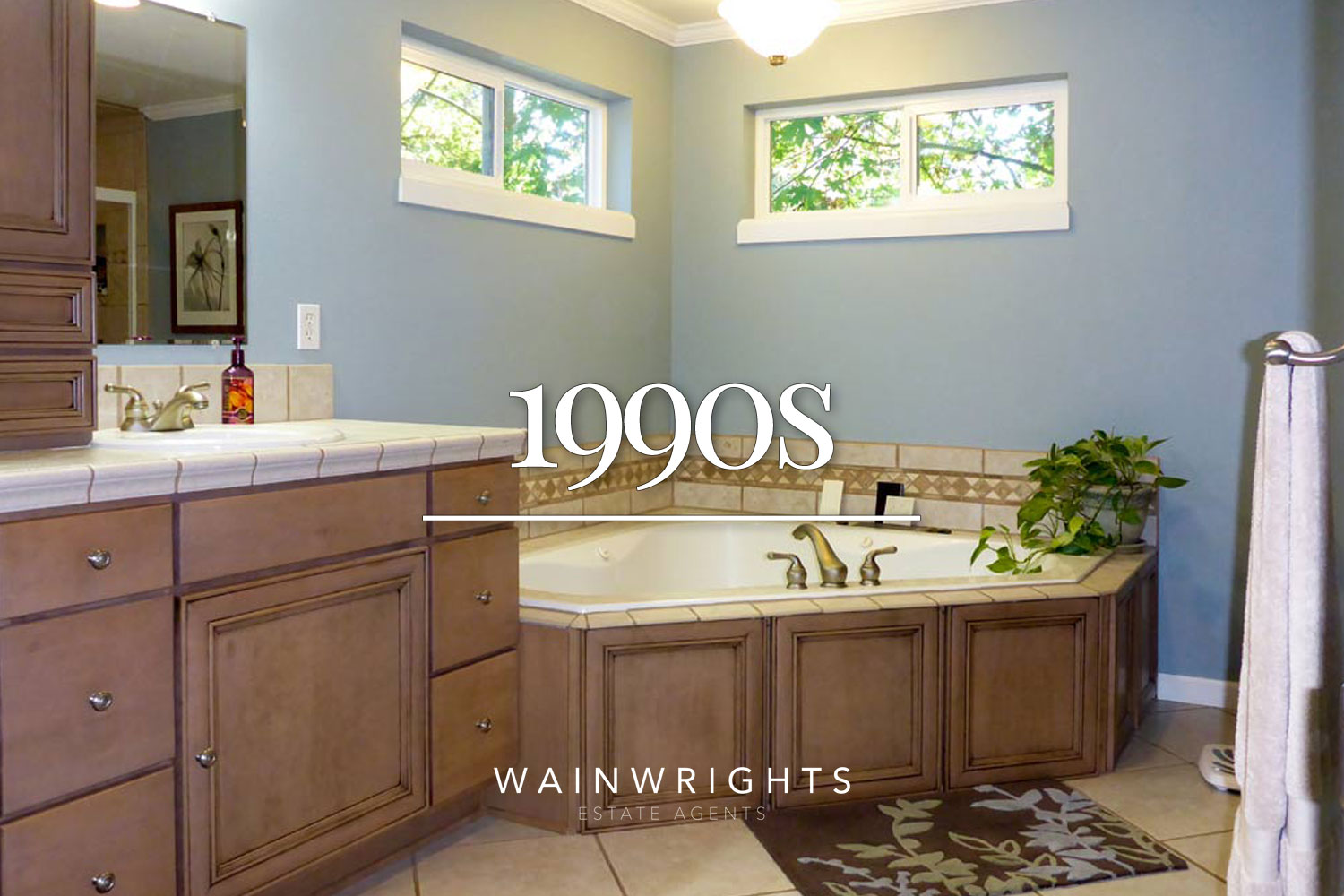 In the 1990s, technology started to make its presence felt in our new builds, although the British public still craved the comforts of traditional features. As a result, mock timber framing and cottage features came hand in hand with improved insulation in walls and double glazing. In lounges, shelving units were designed specifically to accommodate entertainment devices.

On a wider scale, consideration was given to new housing developments, with individually designed homes with fancy titles like ‘The Charleston’ giving neighbourhoods more of a village vibe.

Highlight of the 90’s Home: Corner baths and magnolia paint. 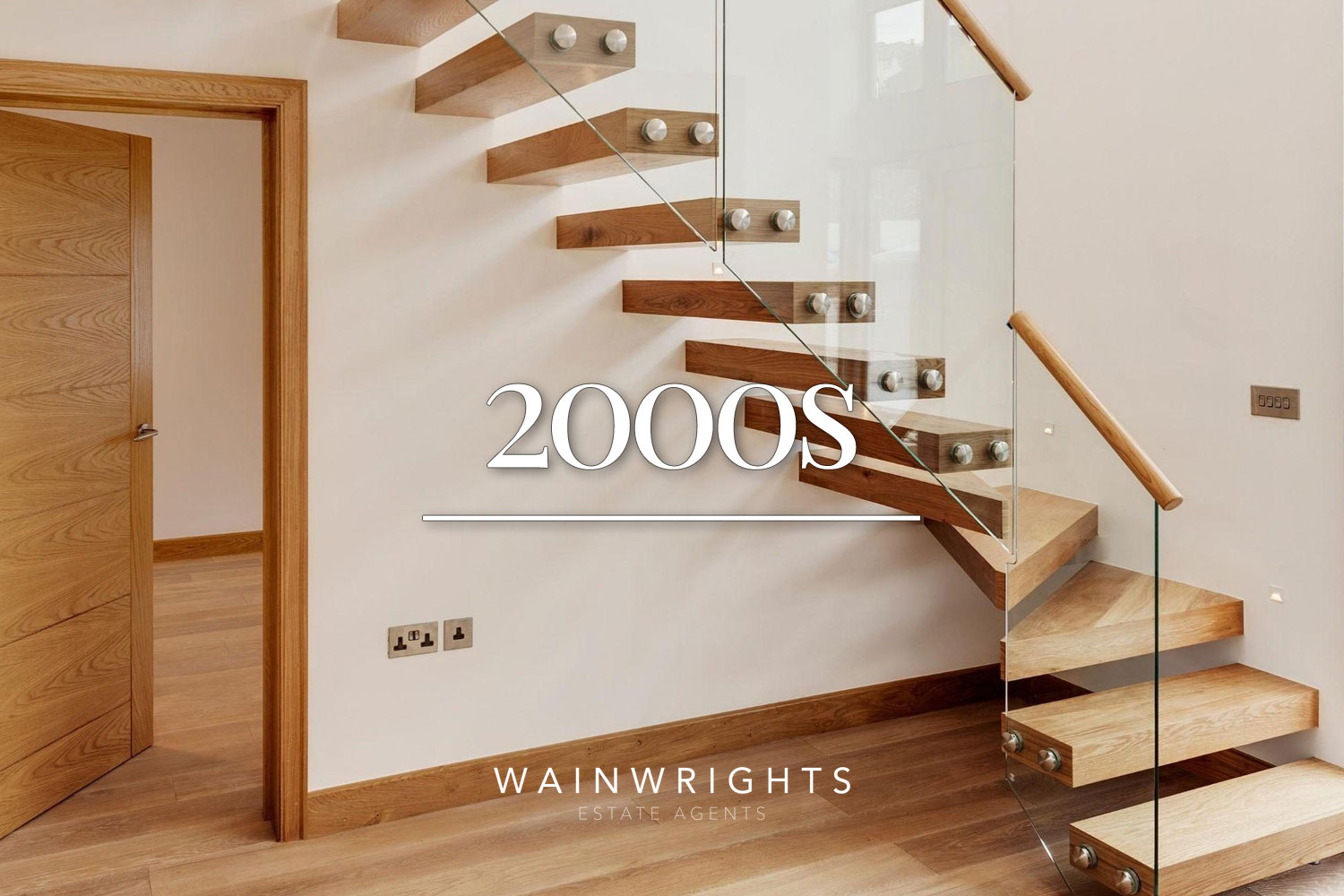 The Millennium saw the birth of contemporary architecture; a combination of different styles including postmodernism, traditional and high-tech. New builds since the turn of the century have seen a rise in the use of glass and aluminium, and asymmetrical design.

Gone is the fondness for beige and magnolia, replaced instead with shades of light grey in interior design. Fireplaces vie with televisions as a focal point in lounges, whilst the kitchen island with pendant lighting above becomes a popular choice.

Highlight of the 00’s Home: Cantilevered staircases (what could be more magical than a floating staircase?) 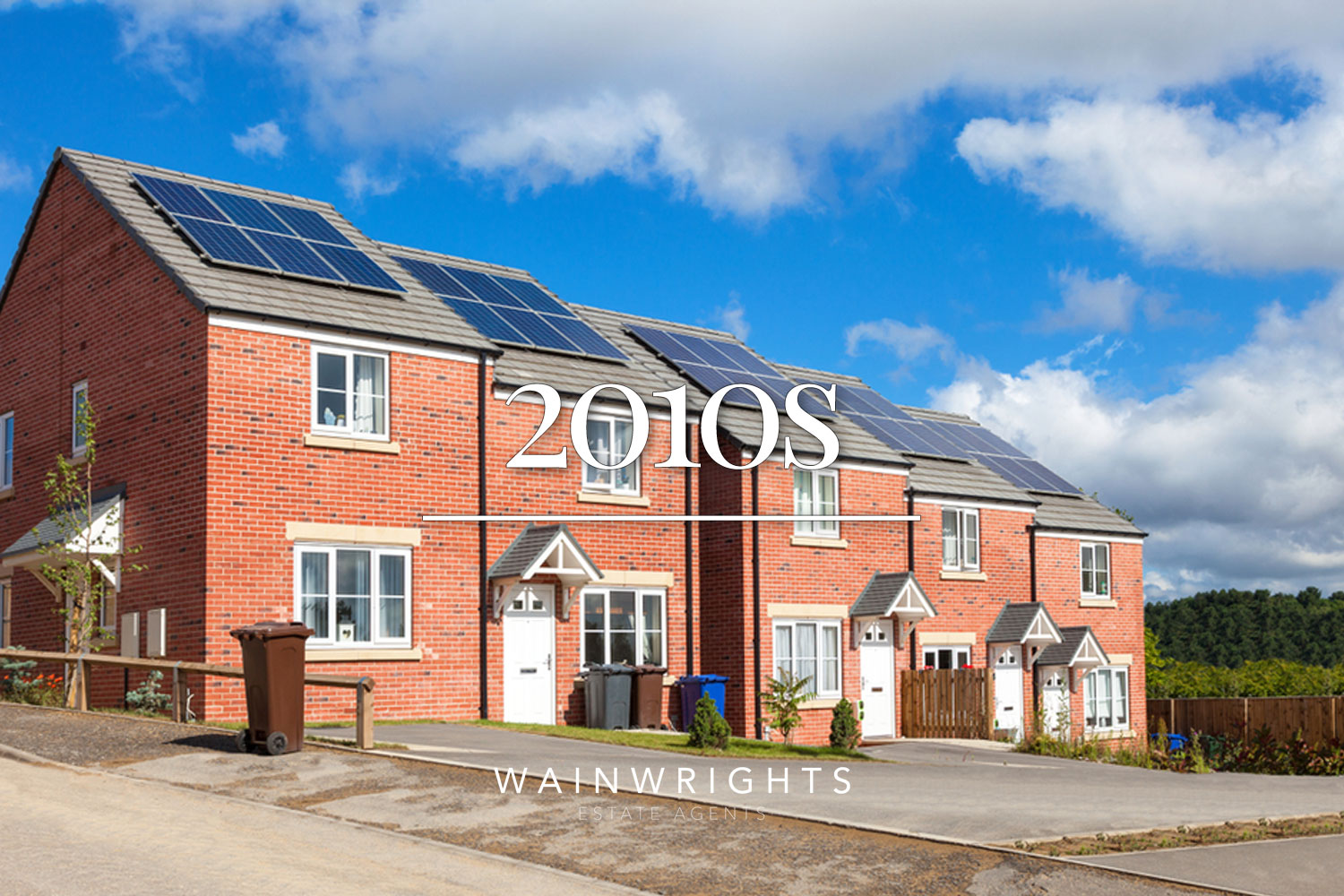 Sustainability is the defining term of our present times. Homes now contain features which conserve heat and energy – often producing or harnessing their own through solar panels, wastewater and rain harvesting systems. From green roofs to the use of wood cladding and recycled materials, houses facing south to maximise the sunlight for heating the home more efficiently, living in harmony with nature is at the crux of today’s homes.

Highlight of the 10-20s Home: Rainfall showers, freestanding baths on plinths in bedrooms.

Of course, your home is your castle, and whichever century your home falls into, we’d like to wish you all a lovely jubilee weekend celebrating the best of British – our very own Queen Elizabeth II.

If you would like to get right up to date and sell or purchase your next home with us then get in touch.